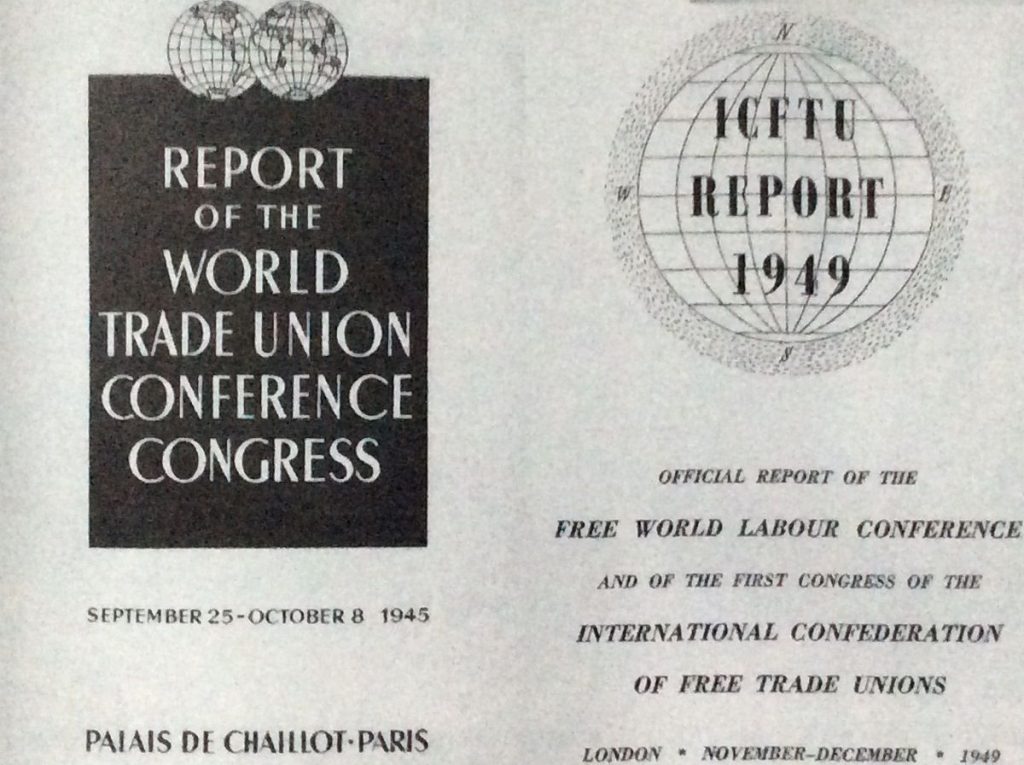 Formed in 1949 as the global trade union international for unions in the Western bloc, the International Confederation of Free Trade Unions (ICFTU) was the latest in a succession of bodies dating back to 1902 that aimed to speak for international labour. It was established in rivalry to the World Federation of Trade Unions (WFTU), created four years earlier in an ambitious attempt to unite unions worldwide, but which had soon fractured under the polarising pressures of the Cold War.

Separate international union organisations representing specific trades and occupations – the international trade secretariats (ITS) – were already well established. The role the new ICFTU set itself was to speak for organised labour in its totality within the bodies that made up the architecture of the international regulatory system – United Nations, ILO, OECD, NATO. Alongside this it aimed to promote trade union organisation on the ground in developing countries in partnership with the ITSs.

The International Confederation of Free Trade Unions is a collaborative work by five historians written to coincide with the fiftieth anniversary of the ICFTU in 1999. It sets out to describe and analyse the work of these various international organisations throughout the twentieth century. Anthony Carew’s contribution begins with the early years of the WFTU and its failure, in the climate of growing cold-war tensions, to maintain in the trade union field the wartime “big power alliance” that had been its raison d’être.

Here the central issue was the realistic fear among western trade union centres that the Federation was already falling under Soviet communist dominance and that its essential trade union mission was being squeezed out in favour of an ideological agenda. Over the twin issues of the American offer of Marshall Aid and the right of the ITSs to pursue independently their trade union interests, the WFTU began to fracture. Concurrently, a campaign began, led by the American Federation of Labor (AFL), to regroup the national trade union centres of the “West” in a new free trade union international.

The account proceeds to examine the record of the ICFTU during its crucial first quarter century. Focusing on European recovery and areas such as workers’ housing as a first priority, the ICFTU went on to provide powerful backing to the emerging European institutions that gave rise eventually to he European Economic Community. It was from the outset a dedicated supporter of NATO. Within the UN, the ICFTU used its consultative status to back measures in the field of land reform and for the promotion of international trade. And in the International Labour Organisation – the tripartite agency where it applied its greatest efforts – the Confederation, acting as the secretariat of the Workers’ Group, steered the Organisation’s work in establishing a body of important Conventions to protect workers’ rights.

In the field of organising, the study traces the efforts of the ICFTU to promote trade unionism in developing countries through financial assistance to unions on the ground and the loan of experienced organisers. The ICFTU also established educational institutions in various parts of the world where leadership skills were acquired and the training of trainers in the fundamentals of trade union administration and democratic practice took place. These efforts were valuable in producing a cadre of union leaders among whom some – such as Ahmed Ben Bella, Tom Mboya, Alberto Luis Monge, Devan Nair, Milton Obote, Ahmed Ben Salah and Ahmed Sekou Touré – went on to combine a trade union role with leadership of nationalist movements in their country’s political system.

Yet ICFTU resources were only a fraction of what was needed to meet the challenges it faced. Its elaborate superstructure often proved too much for its underdeveloped base to support, and in the struggle with communist opponents it experienced difficulty in preaching the superiority of political democracy as understood in the west to people with little freedom and low living standards. On the contrary such people were often more likely to warm to the communists’ political message rather than the economic model of trade unionism for which the ICFTU stood.

Meanwhile the ICFTU was also racked by internal tensions arising especially from rivalry between the British TUC and the American Federation of Labor (AFL – later AFL-CIO), its two largest affiliates. Traceable back to the ICFTU’s foundation and a bitter debate over what constituted “free” trade unionism, it revolved around the twin issues of anti-communism and anti-colonialism. The key questions were twofold. Was the ICFTU as committed to the cause of anti-communism as it needed to be and the AFL demanded? And was ICFTU commitment to decolonisation undermined by the TUC’s reluctance to accept a devolved ICFTU regional union structure for Africa with power to guide the development of a form of trade unionism at odds with its colonial traditions?

Over these issues, the ICFTU secretariat found itself buffeted from opposite directions by its largest affiliates. With the explosion of African nationalism in the late 1950s, and American fears of communists assuming leadership of the movement and opening up a new front in the Cold War, the ICFTU general secretary was forced to resign, along with key senior officials in the secretariat.

A rebooting of the ICFTU under a new general secretary and support staff failed to restore the full-hearted cooperation of its two leading affiliates. The TUC held back from contributing to the newly expanded range of international activities now proposed. Meanwhile, dissatisfied at its lack of influence over ICFTU operations under the new general secretary, the AFL-CIO was increasingly inclined to mount its own programmes in different parts of the world. And by the mid-1960s, with a growing number of affiliates making contacts with communist unions of the Eastern bloc in accordance with the spirit of détente, and the AFL-CIO in contrast insisting that anti-communism be the ICFTU’s core mission, the organisation was increasingly paralysed.

More and more a lame duck, the general secretary managed to cling to his job until 1967 before becoming the second holder of the office to resign under American pressure, a victim of disruptive internal politics that now called into question the ICFTU’s relevance and even its capacity to survive. By the time a new (third) general secretary was installed, the controversial issue of “contacts with communists” had become such a toxic issue for the AFL-CIO that it was only a matter of time before it decided that the ICFTU was an inadequate vehicle for its brand of free trade unionism. Two years later it found a suitable issue over which to withdraw from membership, at a stroke reducing ICFTU membership by a quarter and plunging it into dire financial straits.

At precisely the time when industrial capital was internationalising with the spread of multinational enterprises, and when worker militancy was reaching a post-war high, the ability of the international labour movement to offer leadership was thus greatly constrained. It would be a dozen years before the Americans could be induced to re-join the ICFTU, and by that time the post-war boom and conditions of full employment that had afforded unions their best chance of advancing the interests of labour on an international front had passed. What was now emerging was decades of neo-liberalism and trade union retreat. 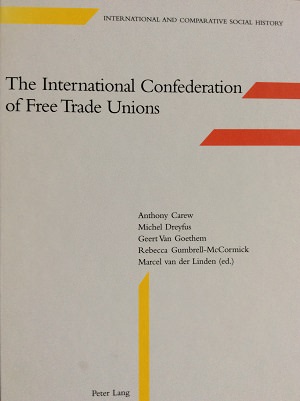