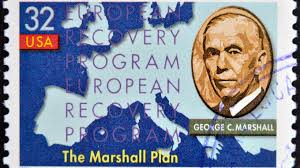 Labour Under the Marshall Plan: The Politics of Productivity and the Marketing of Management Sciences

If one year in the post-war period saw the world’s fate politically sealed, it was 1947. In that year the emerging Cold War took a quantum leap forward, while the development with the biggest impact was undoubtedly the announcement of the Marshall Plan for aid to Europe. The Chairman of the US Senate Foreign Relations Committee suggested that it would be ‘the turning point in history for a hundred years to come’.

Marshall Aid would secure America’s economic influence over Western Europe. It crystallised the split between East and West, preparing the ground for the North Atlantic Alliance and NATO. For trade unionists the Marshall Plan led directly to a split in the World Federation of Trade unions, formalising a division in the ranks of organised labour that lasted for sixty years.

Named after US Secretary of State George Marshall, it was not so much a ‘plan’ as a catchall concept that served a variety of ends. In an immediate sense, it was a humanitarian programme to relieve economic hardship, shortages of food and raw materials. More selfishly, it was meant to bolster European purchasing power for American goods and so ward off the prospect of a post-war US recession. Beyond that, the aid programme was about restructuring the international economy to allow the US to derive the maximum benefit from its huge economic potential. The Plan’s anti-communist angle was well advertised in US congressional debates. But then the more sophisticated American strategists saw Europe’s ‘problem’ as economic rather than political: communism was only a threat as long as the European economy was failing to deliver goods and living standards.

There was no lack of awareness among European trade unions that the aid would come with strings. A fear of being bounced into polarised politics, with the agenda set elsewhere, led Europeans to discuss the creation of a possible “third force” in world politics. But thinking here was often vague, confused and riddled with contradictions, and could hardly withstand the polarising tendencies abroad. Pressure to ‘chose sides’ was irresistible. Union leaders eventually persuaded themselves that the offer of aid could be approached pragmatically in the same spirit as collective bargaining, involving an expectation of give and take. Some reasoned that an aid programme would need to be planned, and that would give the parties of the left - society’s natural planners - a key role in guiding the programme and so strengthening their position.

Fears about US interference in European domestic affairs were also allayed by assurances from the American labour movement, which vigorously supported the humanitarian angle in the aid programme. US labour stressed the need for the Marshall Plan to be a ‘people’s programme’. Claiming that the American Federation of Labour had an ‘indispensible service to perform’, its president argued, ‘The wage earners of this country can convince the wage earners of Europe that our government does not seek power over their lives or wants to possess their land’. Or as US labour leader, Jim Carey, told the WFTU executive board:

I am here to talk to you not about ideologies, because we have no American ideologies to export, but about food and coal and fertilisers and agricultural machinery and power plants and transportation and cotton and steel…

But, of course, ‘foreign interference’ could not simply be wished away. As Senator Henry Cabot Lodge observed: ‘God knows this Marshall Plan is going to be the biggest damned interference in international affairs that there has ever been in history…I don’t think we have to be so sensitive about interfering in the internal affairs of these countries’.

American unions insisted on a role in administering the labour side of the Marshall Plan. A Labour Division comprising some 65 union officials on secondment was established, with most of them based in European capitals. They were to advise on labour and manpower policy, ensure that Marshall Plan propaganda found its target among European workers, and generally to show the acceptable face of the aid programme to European trade unionists. They were expected to help European labour develop policy perspectives with values powerful enough to match the appeal of international communism. As Marshall Plan chief Paul Hoffman saw the task, in labour terms it would be a contest between ‘the American production line and the communist party line’.

Once organisational splits occurred among unions in the recipient countries, these Marshall Plan labour officers were largely involved in helping wage the anti-communist struggle. Without their knowledge, some of their work was bound up with operations financed by the Central Intelligence Agency. A secret ‘administrator’s fund’ existed within the Marshall Plan for ‘financing without indication of source’ projects approved by the CIA. And while Marshall Plan administrators were often willing to interfere to secure corporate interests, they tended to reject calls to intervene in favour of social and welfare reforms beneficial to workers.

From 1950 onwards the American trade unionists involved in administering the programme became increasingly disillusioned with its direction. With less influence than their fellow administrators seconded from business, little was left for them beyond a supporting role in selling to European workers what was in essence a bogus story of how America achieved high levels of productivity – one that downplayed the key role of capital investment while stressing the alleged compliant position of US labour. As a US Information Service pamphlet put it: ‘the secret of the high productivity of the United States is not in the machine…it lies in the unreserved collaboration of the worker and the boss’. Labour-management partnership in free enterprise rather than socialism was the emphasis.  Part of a longer term aim to create a climate of ideas and values compatible with US interests, the productivity initiatives were presented to Europeans as ideologically neutral -- something that workers and managers could subscribe to as simple common sense, without the need for industrial conflict.

The key bodies here, designed to ‘sell’ the idea of scientific management and practical business unionism to workers and managers, were American-funded national productivity councils. They sponsored study visits to the United States by thousands of workers, brought over to see ‘the American way’ at first hand, with the expectation that they would return as evangelists. The first productivity council to be established, in Britain, saw itself engaged in ‘one of the largest experiments in adult education ever undertaken’. Hard on its heals came university-based management science courses with access to Marshall funding, leading in due course to the cult of the business school, institutions that would soon litter the academic landscape.

In the final analysis, the Marshall Plan disappointed those who hoped to shape it as a workers’ programme. Where it was influential was in developing among European labour a consciousness – indeed a resigned acceptance – of the need for an increasing level of worker productivity, with all that implied for the role of unions in the workplace and their relationship with capital. Cultivating this new ‘common sense’ was perhaps the Marshall Plan’s greatest achievement with a lasting effect on labour in its struggle for greater material reward and control over the process through which wealth is created. 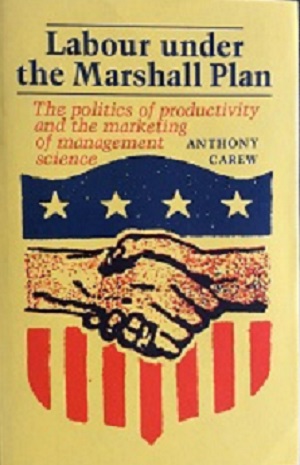